The Best Twitters In The Pharmaceutical Industry In The UK A report published at PharmaTimes Magazine in September 2018 examined the effectiveness of Twitter for pharmaceutical companies in the UK, classifying Bayer, MSD, and AbbVie as the most productive.

The study called ” UK Twitter Ranking – Summer 2018 ” and developed by Owen Health and PR takes a snapshot of the Twitter performance of 11 pharmaceutical companies in the UK that have invested heavily in this social media – in alphabetical order we find AbbVie, AstraZeneca, Bayer, Boehringer Ingelheim, Daiichi Sankyo, MSD, Novartis, Pfizer, Roche, Sanofi and Teva.

“We wanted to see if pharmaceutical companies used social media as part of a multi-channel digital marketing strategy or not,” says Steve Sponder, director of Owen Health. “And we wanted to see the impact this was having on the quality of their social media channels. We saw first-hand the challenges presented by social platforms, becoming payment platforms for many global brands in other sectors, eg.retail, entertainment and automotive, and I felt it was time to investigate the pharmaceutical sector “.

Bayer, MSD, and AbbVie achieved the highest performance scores of 66, 65 and 59 respectively. These scores were calculated using various data points that take into account the following attributes: 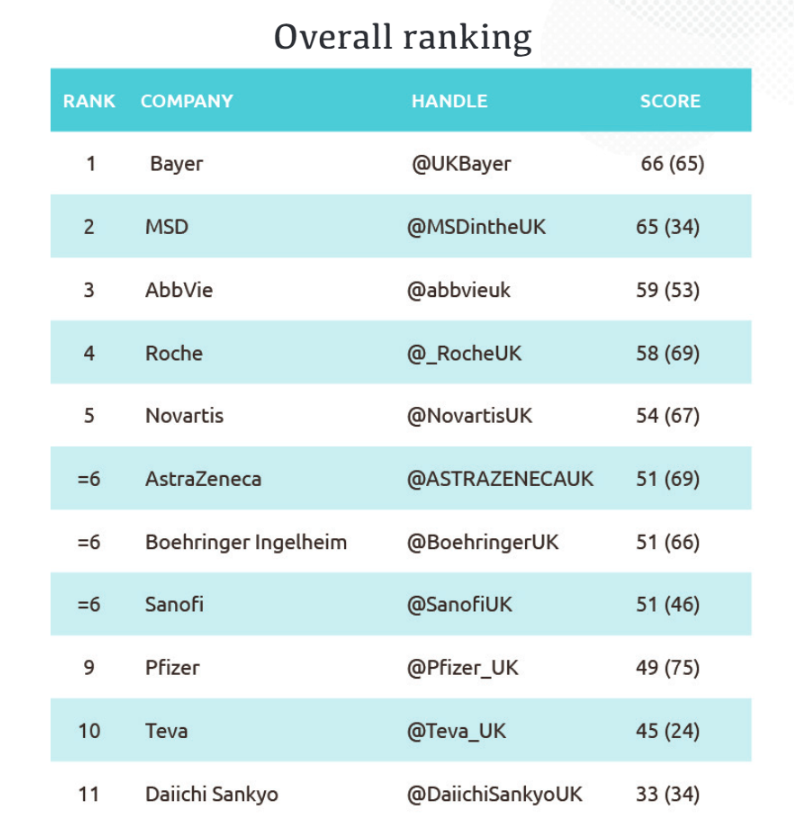 Only Bayer, MSD, AbbVie and Roche had verified accounts. The companies with the highest reach were Sanofi and Bayer with 4,164 and 4,084 followers respectively. Novartis, AstraZeneca, and Pfizer were ahead of accounting activity, measured by the number of tweets published over the course of a month. The most influential British pharmaceutical companies on Twitter were Boehringer Ingelheim, AstraZeneca, and Novartis, measured using the Klout system, which uses data points such as follower count, retweets, membership lists, how many spam accounts are following a company, how influential are the people retweeting companies and unique mentions. 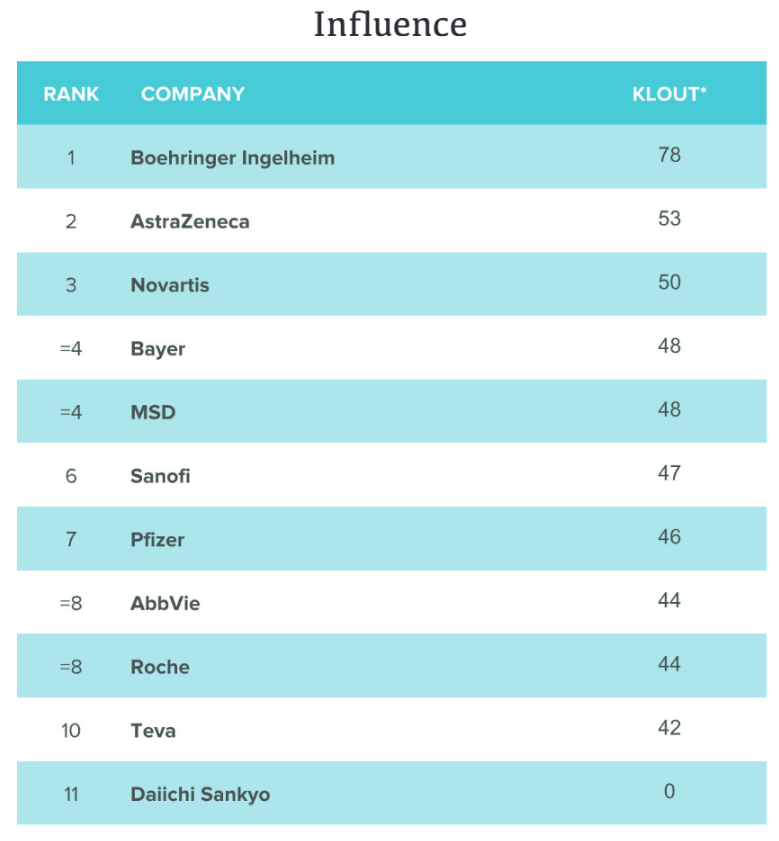 Engagement and Twitter activity of pharmaceutical companies in the UK

Involvement, meanwhile, was measured by creating a weighted formula, incorporating likes, retweets, and responses, which produced an engagement score for each account. This score was normalized, taking into account the number of followers and the volume of tweets sent during the period. Pfizer, MSD, and Teva achieved the highest engagement scores through this method and positioned themselves well beyond the other companies. 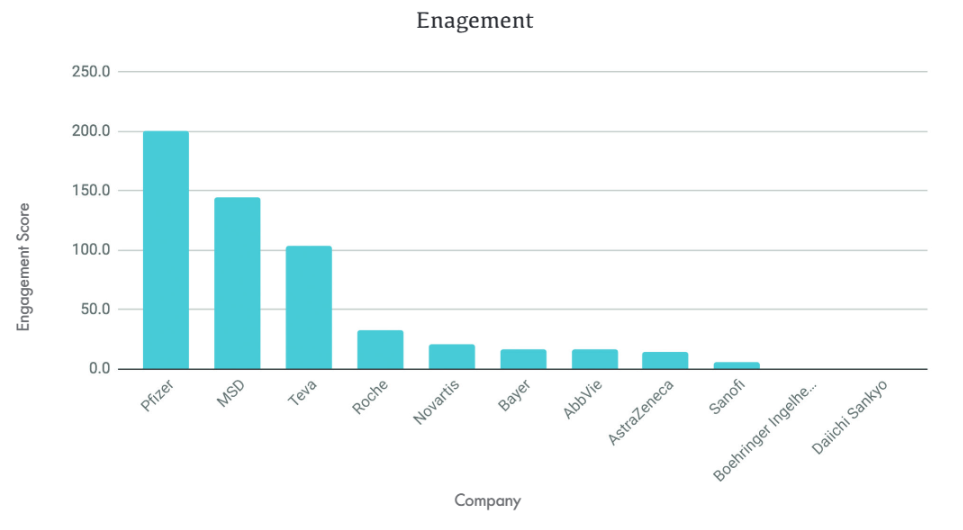 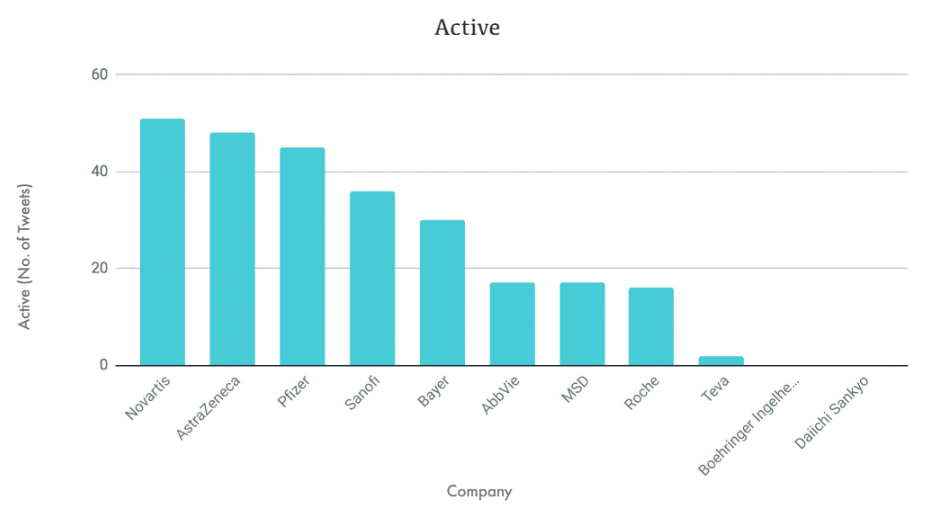 Sponder states that the contents of the patient’s condition received the most involvement: “This required various forms, from the support of various charities to Pfizer’s request for technology start-ups with a passion for patients to join their HealthcareHub.

“This showed us – continued Sponder – that companies must ensure that the content strategy represents the values ​​and mission of this company: it must be genuine. It might seem obvious, but you would be surprised. So bringing content to life through interesting and distinctive narration really makes the difference. Finally, don’t think that work is done when the content is developed. Significant budgets for content promotion are not nice to have, it’s a necessity ”.

He added: “Community size metrics could be detrimental to the brand if there were no commitment to ensure that the community could be involved. In our research, we have seen that there is a correlation between large community dimensions and low involvement. If you are not committed to investing in a large community, then perhaps you should consider an alternative Digital Marketing strategy.

The report concludes that the best approach is for companies to put the interests of their target audience at the center of a social media strategy, while information transmission without thought adds little value to the company or audience they are trying to reach.

“Too many [companies] seem to struggle with their identity and purpose,” the report said. “ Engaging in a robust Digital Content Marketing plan, which offers relevant and distinctive content for your Twitter account in the UK, is vital and can be done on a large scale and in a cost-effective way. Working smarter is no longer difficult when it comes to Twitter content. Without this they are just playing and losing precious time on the social media; at best it lacks opportunities and at worst it damages their corporate brand “.

The Online Communication Treads Strong In The Health Sector
July 17, 2019